Iceland - 14 miles across the Snæfellsnes Peninsula in a storm

This is an edited excerpt from a journal I kept. This post is from the section on Iceland, where I lived and taught for about two months. The story here is from a trip to the Snæfellsnes Peninsula on a long weekend.

While I was teaching at the NATO base in Keflavik I took a trip to the Snæfellsnes Peninsula. It is a mountainous peninsula that juts westward into the sea. At the tip is Snæfellsjökull. Actually this is Mt. Snæfells, but to distinguish it from two others with the same name it’s referred to by the glacier on it (jökull means glacier in Icelandic). This is the mountain that was used by Jules Verne in "Journey to the Center of the Earth". There was a little fresh snow on the mountains, and it was a very beautiful day when I arrived.

This is an edited excerpt from a journal I kept. This post includes primarily the sections about hitchhiking, other parts about Turkey and Istanbul are not included. It starts with my exit from Bulgaria and ends at the first town in Greece.

In the process of moving a few things saved a long time ago are showing up. Here's an old Peanuts strip along the same lines as a few previous comics posted here:

Here's another comic I couldn't resist. (Link to Previous One)

I've never understood how people can give up 50 weeks a year, out of 52, to work in an office or cubicle. Money, I guess. I do miss that so I can understand the appeal. But really, 2 weeks to yourself?

There's a reason I gave up working in the business world rather quickly. However, while people often envy my avoidance of the 9-to-5 routine and the good points such as the times I get to spend outdoors they rarely appreciate the sacrifices that go with it. To quote a song by blues musician John Mayall:


"You call us the privileged few...
If you think what we do isn't working...
Then you don't understand what we do ...


So life can often be tough, and there are certainly gambles, but at least I'm not like this:

I couldn't help laughing when I saw this!
Humor · Personal / Diary • 1 Comments/Trackbacks

Break Away from the Herd

PISCES (Feb 19 - Mar 20): Break away from the herd. Those who follow you may be attracted by your potential success but could disappear in a crunch. 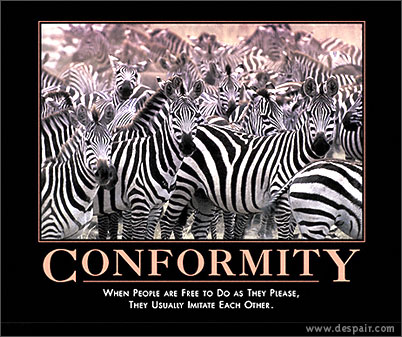